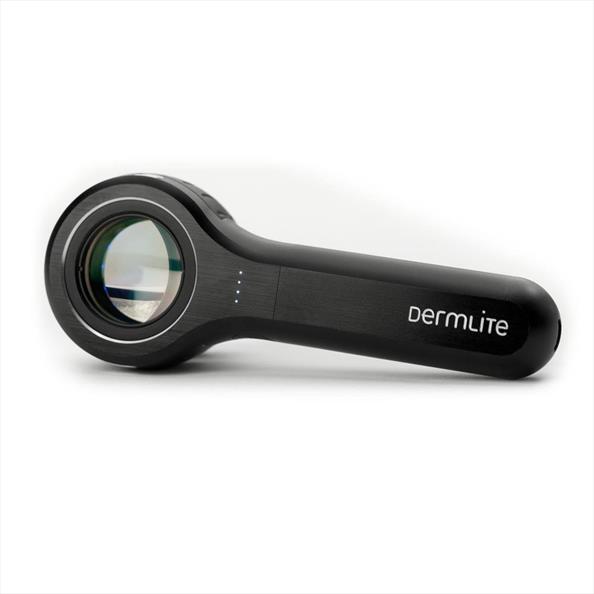 An amazingly smooth, ergonomically optimized all-aluminium design that comfortably moulds to your hand, DermLite DL4 puts phenomenal versatility, the largest optics of any pocket-size DermLite, and instant on/off control right at your fingertips.

DL4 uses magnetic connectivity to achieve groundbreaking convenience and fast workflows. Not only are both faceplate (with 10 mm reticle) and eyepiece magnetically attached, your smart devices, like iPhone, iPad or Galaxy S series phones, also attach magnetically, enabling you to go between taking clinical and dermoscopic photos quicker than ever before.

Along with the growing need for dermoscopy, infection control is becoming an increasingly important aspect of providing care. With its Infection Control and Epidemiology system IceCap™, DL4 has you covered. Disposable snap-on IceCaps attach to the spacer and may greatly reduce the risk of cross-contamination.

A newly developed DL4 retractable glass faceplate design allows you to go between non-contact & contact modalities smoother than ever and lets you precisely focus your image while in skin contact.

See deeper. Even into the battery.

DermLite DL4’s high-powered LEDs and rechargeable battery produce light in an extremely energy-efficient way. And, in order to know when you run out of battery, DL4 now has a more granular four-level charge indicator. If you need to recharge, you can do so from any USB port using the standard Micro USB to USB cable included with each DL4.

In its elegance and compactness, DermLite DL4 is simply the most capable dermatoscope available.